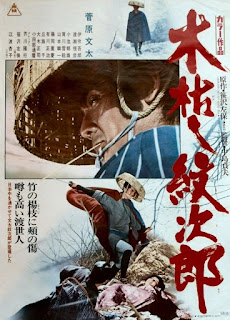 It is rather surprising that the 1972 Toei produced jidaigeki Kogarashi Monjiro: The Withered Tree has never received a proper Western release, especially with its similar style to the spaghetti westerns and Clint Eastwood’s “man with no name.” With an interesting story, lead character, and violent sword fights, this is one forgotten gem that deserves some attention. Kogarashi Monjiro is a lone samurai who agrees to take responsibility for a murder that his friend committed so that he can stay with his dying mother, with the expectation that his friend will confess and get him pardoned once she dies. Monjiro is sentenced to an island for prisoners. When he discovers that his friend’s mother has died over a year ago, Monjiro seeks to escape with a group of prisoners in order to get his revenge.


The similarity to Eastwood’s character and the film being influenced by the Italian westerns is obvious with the style in which it is presented. Monjiro’s signature look is the Japanese version of Eastwood. He wears a straw hat, sports a cloak that covers his entire body, and always has a long wooden toothpick in his mouth. His eyes are somewhat squinted like Eastwood’s are in the Italian westerns and his character is rather stoic, usually not speaking very much in order to absorb his surroundings. The music even feels like a hybrid of a more modernized Japanese style infused with the sounds that are familiar in Italian westerns.


The cast and crew contain a core group of Toei veterans. It was directed by Sadao Nakajima, who has 64 film and television credits to his name and has never worked outside of Toei. Lead actor Bunta Sugawara has 171 film and television credits in his long career. During his time at Toei, he appeared in Gendai Yakuza and the popular Kinji Fukasaku yakuza series Battles Without Honor and Humanity. He would appear in one more picture as Monjiro that was also released in 1972. The camera work by Nakajima is done well, with a noticeable preference to using more lengthy sequences as opposed to heavy editing. There are also several scenes in which they incorporate handheld cameras, mostly for certain fight sequences involving people running around in different areas.


The fight sequences are good and match other similar jidaigeki of the time, with loads of blood and extremely violent battles. The overall tone is also bleak, especially for any character other than Monjiro. Besides the sequel, the character was popular enough to produce a television series about him starring Atsuo Nakamura. It began in 1972, but I was unable to obtain any information regarding if it ran longer than that year.


While not the greatest jidaigeki ever produced, it is worthy of taking a look at because of the fascinating lead character and bloody action.